written by Joy January 18, 2012
Spread the love
Thereare a lot of ways to greet a Happy New Year in Chinese, but as majority of theChinese Filipinos here in the Philippines speak the Hokkien dialect, I chose mytitle greetings in Hokkien. Gong Hay Fat Choi or Kung Hei Fat Choi, thegreeting in Cantonese is commonly seen in banners around the China Town inOngpin, Manila. Gong Xi Fa Cai also means the same as it is the greeting inMandarin.
January23, 2012, marks The Year of the Black Water Dragon in the Chinese LunarCalendar.  It holds a specialsignificance for the Chinese people. People born this year are deemed to bevery lucky, for the Dragon is a symbol of power, superiority and rule.
ChineseNew Year, known as “Lunar New Year or Spring Festival,” is the mostimportant among the traditional festivity of the Chinese holidays. It is thetime that every family does a general cleaning of their homes to drive andsweep away any ill-fortune and bad luck in hopes to make way for good incomingluck. Windows and doors are decorated to attract and encourage good fortune,wealth, happiness and health or longevity.
Celebrationincludes Dragon and Lion dances on the streets, fireworks, family and friends gatherings.The family table is abundant with food and sweet delicacies on New Year’s Eve. Parentsgive their children their red envelopes “ang pow” early the next morning. Redpackets contain money, usually varying from a couple of dollars or severalhundred of pesos. As per custom the amount of money in the red packets shouldbe of even numbers. Odd numbers are associated with cash given during funerals.Number 8 and 6 are considered lucky numbers. 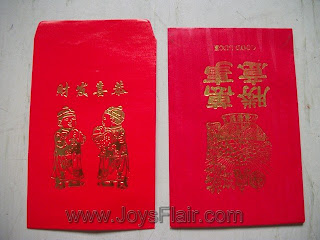 Looking Your Best for a Black Tie Affair

Thanks for differentiating that mommy Joy, I can only say thank you in Mandarin, I find the language difficult compared to Japanese..ahihi.