My Awesome Guide To Setting Up A Home Cinema

I’ve been asking two question lately. What do I want from my home and what can it be? While I haven’t fully answered either question yet, I have partially answered both. My home can be the source of great entertainment, and I want my front room to be the main point of that. I’m talking about setting up a home cinema system.  I’m not referring to the type of cinema Robert Downey Jr has in his mansion. But rather a general setup normal people can afford and do themselves. So, where to begin?

A home cinema isn’t going to be any good without a good screen to watch films and television on. The way I see it there are three to choose from, and soon there may be four. You can either get a flat screen 1080p tv, an ultra HD tv or a projecting system.

I know many people are going to favour the projection set up. If you opt for this route, I would make sure you make your room as dark as possible. Ideally, you would be looking to install blackout blinds and painting the room a dark colour. You could also choose a room in your house that has zero windows if you have one! That would be the perfect place for a home cinema.

Another thing to consider when choosing the screen is whether or not to buy a 3D capable device. Many people believe 3D is on its way out. However, look at the upcoming major blockbusters: Batman v Superman, Captain America: Civil War and Star Wars. They are all scheduled for a 3D release, so I don’t think it’s dying anytime soon.

Is streaming the way forward? I certainly think so. It’s a lot easier than collecting all the boxes, and you can get every major release on streaming sites like Netflix. Of course, you will need a fast internet, provider. If you don’t have one check out Time Warner cable because they offer some great deals. You will need to check availability of Time Warner internet service in your area first.

After that, just sign up for a service like Netflix or Hulu. If the internet is slow in your area, it might be worth investing in a Blu-ray player as well. That way you’ll always be able to access your films and TV shows.

I’ve read plenty of reviews online recommending a sound bar from Graham Slee HiFi  as an affordable option for those who want home surround sound. A proper surround system will cost a couple of thousand where as a sound bar will at most be around five hundred. So, I certainly see the cost advantages. But I still favour the organic surround sound a more expensive system offers. 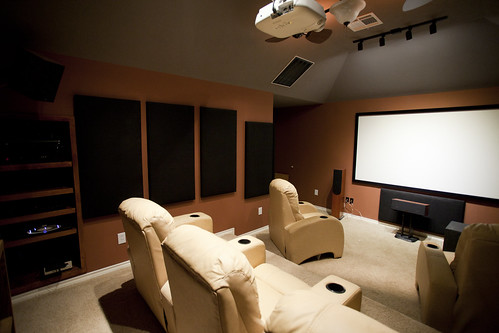 Finally, you need to look for some comfy seats. I have heard you can buy proper cinema seats off sites like Ebay. But, if you’re going to be at home why not just buy a luxury sofa set. That way you can stretch out and enjoy the best films in absolute comfort from your front room. It’s certainly what I intend to do.

Quickly Improve Your Home With My Top Tips

The Psychology Behind Successful Businesses

Some Simple Ways to Decorate Your House in Summer

Top Tips for installing Stylish Lights in your House

Some Essential Items To Remember When Creating A Backyard Pond

Small Home Improvements That Can Make A World Of A Difference

How To Rock Your Tastes Without Going Overboard